The recent arrest of the Basam web site founder highlights how one penal code provision, Article 258, can be stretched by the ruling Communist Party of Vietnam to take away anyone’s freedom at any time for doing anything that’s not state-sanctioned.

Article 258 is entitled “Abusing democratic freedoms to infringe upon the interests of the State, the legitimate rights and interests of organizations and/or citizens.” On its face, Article 258 is already an anomaly, as any attempt to criminalize the vague and ambiguous “abuse” of freedom will, almost by definition, wipe out such freedoms.

Article 258 has been used to prosecute a wide variety of people for allegedly “abusing” their freedom of speech or religion.

In 2011, two Hoa Hao Buddhism believers were convicted under Article 258 and sentenced to 4 and a half years in prison for distributing leaflets and CD exposing government oppression of their church.

In 2010, reporter Le Nguyen Huong Tra was arrested and held under Article 258 for writing about the singer girlfriend of a police general’s son. She was not prosecuted, and was released after the son got married to someone else.

In 2008, reporters Nguyen Van Hai and Nguyen Viet Chien were prosecuted under Article 258 for writing about corruption at PMU-18, where several million dollars were siphoned off a government infrastructure project. Their case was later changed to be based on an alleged “abuse of position.”

So what does this infamous Article 258 say? The provision states, in full:

1. Those who abuse the rights to freedom of speech, freedom of press, freedom of belief, religion, assembly, association and other democratic freedoms to infringe upon the interests of the State, the legitimate rights and interests of organizations and/or citizens, shall be subject to warning, non-custodial reform for up to three years or a prison term of between six months and three years.

2. Committing the offense in serious circumstances, the offenders shall be sentenced to between two and seven years of imprisonment.

The most frequently used argument by Communist Party supporters is that it protects people’s rights from all infringements by others. However, it is precisely that vague idea that makes the law itself an abuse.

Normally, a crime is defined by specific acts – killing, rape, theft, drug dealing, taking bribes, kidnapping, etc. These provisions are aimed to protect specific interests of organizations and/or citizens in the society. More broadly speaking, law in its essence is made to protect the interests of every member in a society against certain specific acts.

So if specific bad acts are already banned, why is a law created just to repeat this purpose? This suggests that Article 258 is broadly worded so that it can be used to suppress freedom in a way the government doesn’t want to admit.

Criminal justice theory of Vietnam states that a crime has to be specific to an act or a failure to act. For example, Article 8 of the Penal Code defines a crime as “an act dangerous to the society.” So, a crime must constitute specific acts instead of just ideas or concepts.

Vagueness is a flaw that lawmakers must always avoid. Suppose a decree requires government officials to create a good Internet environment in Vietnam, or else they will lose their jobs. The adjective “good” makes the decree vague and broad, and it becomes a problem because nobody can say whether an official has or has not committed a violation and whether he or she should be sacked.

A vague or ambiguous statute is the one that has indefinite application to particular cases. Article 258 contains a number of such vague words, including “abusing” and “interests of the state.” It raises questions:

- What is “abusing”? Is it an abuse to protest against American war in Iraq? Or against Russian war in Crimea? There are no criteria in any law books in Vietnam that can help answer this question.

- To which extent can a citizen enjoy his/her freedom before being accused of “abusing” it? In fact, how can freedoms be exercised without being “abused”?

- What does it mean by “the interests of the state”? By whom are these interests defined? Is there anything like a list of such interests so that people can avoid infringing upon?

The text of Article 258, for sure, does not answer any of these questions. Worse, the authority to interpret laws in Vietnam lies in the hands of security forces and the courts, all under the Communist Party’s absolute control. This leaves unlimited space for the police to act as they please, which leads to yet another question:

The answer is, nothing. There’s nothing to stop that abuse. 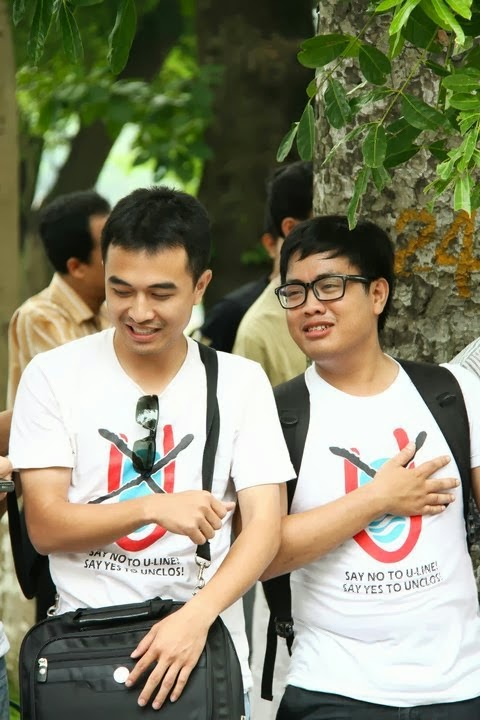 By protesting against China, are they "abusing their democratic freedoms"?

Abuse of power is precisely what’s been happening. In 2009, three people, including Pham Doan Trang, one of the authors, were arrested under Article 258 for planning to produce T-shirts in objection of the bauxite mining project in the Central Highlands and China’s maritime claim to the South China Sea.

What did these people do that was “infringing upon the interests of the state”? What particular interest of the state was violated? How much are the damages?

Obviously, unlike earlier times, today it is legal to produce a T-shirt. Any supposed “abuse of democratic freedoms” must be in the content of what’s printed. But how are these anti-China sentiments infringing upon the interests of the Vietnamese state?

What the police told those arrested, was that the government had decided on the appropriate relationship with China. The T-shirts, police said, made it hard for the government to carry out that policy.

In other words, anyone who says anything that disagrees with government policy, will make it hard for that policy, and therefore will be subject to prosecution under Article 258.

So it was that merely voicing disagreement with a court verdict, for example, became the basis for prosecution under Article 258. In 2013, Dinh Nhat Uy became the first Facebook user convicted pursuant to Article 258 after launching an Internet campaign calling for his brother’s release.

Or an attempt to change burial practices and preach the Bible. That too was called an infringement of state interests and landed Hmongs Ly Van Dinh, Duong Van Tu, and Hoang Van Sang in prison under Article 258.

Article 258 thus became a very convenient tool to prosecute anyone simply for disagreeing with the ruling Communist Party. The Network of Vietnamese Bloggers have circulated a statement calling for abolishing Article 258. Even international NGO’s have spoken out. Human Rights Watch in October 2013 issued a statement saying “Vietnam should revoke Penal Code Article 258… and stop prosecuting people for peacefully exercising their civil and political rights.”

Meanwhile, those bloggers who circulated the statement calling for abolishing Article 258 and told foreign diplomats about their effort? Police have been calling on them and bringing them in for questioning.