By Huy Duong and Tuan Pham

In his RSIS Commentary No 88/2014 Tensions in the South China Sea: Whose Sovereignty over Paracels? Sam Bateman suggests that China may be within its rights in deploying the Haiyang 981 oil rig in its present location. The piece fails to support this view and presents an unbalanced perspective of the relative merits of Vietnam's and China's cases.

IN HIS recent RSIS Commentary No.88/2014, Sam Bateman opined on the dispute between Vietnam and China over Beijing’s decision to locate its oil rig in an area close to Vietnam. He states that "the rig is about 14 nautical miles from a small island in the Paracels claimed by China and 80 nautical miles from Woody Island, a large feature with an area of about 500 hectares occupied by China". This sentence contains several errors and omission, all of them biased in favour of China.

The nearest feature to the rig is Triton Island, which is 17 nautical miles from the rig. While the difference between 14 and 17 nautical miles may seem small, the former implies that the rig is just two nautical miles outside Triton's territorial waters while the distance is actually five nautical miles. Woody Island is 103 nautical miles away, not 80, and its area is generally reported as being only around 200 hectares, consistent with Google Maps. The omission is the failure to mention that the Paracels are also claimed by Vietnam.

Bateman states that "a negotiated maritime boundary in this area would likely place the rig within China’s EEZ even if reduced weight was given to China’s claimed insular features". A careful analysis suggests just the opposite. Firstly, both Vietnam and China claim the Paracels, so it would be incorrect to assume that negotiations or arbitration would be on the basis that these islands and any EEZ allocated to them automatically belong to China.

Even in the improbable event of Vietnam relinquishing its claim on the Paracels, an arbitration court would probably award the area around the rig's location to Vietnam since its distance to the Vietnamese mainland (120 nautical miles) is only marginally greater than that to Woody Island (103 nautical miles). In past negotiations and arbitrations of maritime boundaries worldwide islands far larger than the Paracels have been given a third or less weight than mainland coasts.

In the 2000 Gulf of Tonkin boundary agreement, Vietnam’s Bach Long Vy island was given 1/4 effect. In the 2012 ICJ judgement in the Nicaragua-Colombia dispute, Colombia’s islands were given a quarter of the distance to Nicaragua.

The islands involved in those cases are from about the same size as Woody Island to thirteen times in area. Triton Island is nearer to the drilling site but unlikely to qualify for an EEZ based on UNCLOS Article 121, so it does not have an effect.

Bateman states that "Vietnam claims that because the rig is closer to its mainland coast than to China’s and well inside 200 nautical miles of its coast, it lies within its EEZ and on its continental shelf…but geographical proximity alone is not an unequivocal basis for claiming sovereignty or sovereign rights". This is a confused and misleading description of the basis of Vietnam's claim. The confusion arises because Bateman mixes up the concepts of sovereignty and sovereign rights. 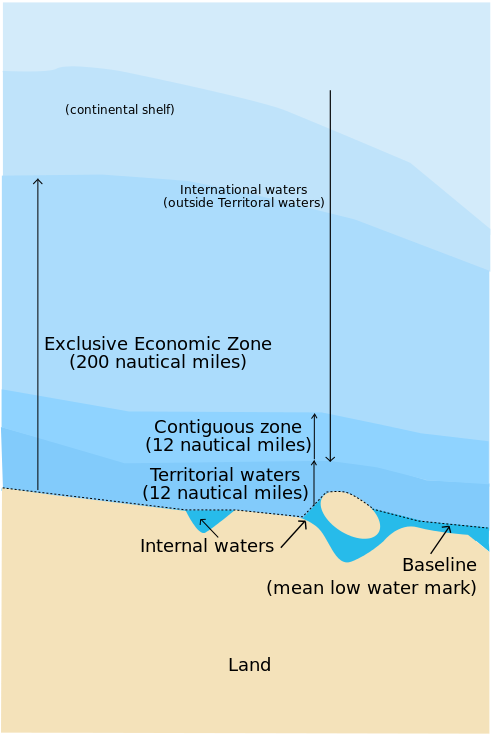 There is indeed a sovereignty dispute involved but it is over the Paracels Island, not about the drilling area. Vietnam's sovereignty claims over the islands were never based on proximity, therefore Bateman's argument about of countries having sovereignty over features inside the EEZ of another is completely irrelevant. As to Bateman's examples of EEZ boundaries being established significantly closer to one country than to another, this is in fact an argument in favour of Vietnam, not China. This is because even if the Paracels belonged to China, past negotiated or arbitrated EEZ boundaries have tended to favour the mainland (Vietnam in this case), as argued earlier.

Bateman is dismissive of Vietnam's claim to the Paracels, but his arguments are weak. It is true that North Vietnam kept quiet on the sovereignty matter, but in international law this is not recognition. In his 1958 diplomatic note, which Bateman presumably referred to, North Vietnam's PM Pham Van Dong refrained from mentioning the Paracel or Spratly Islands. In addition, South Vietnam always asserted and defended its claim.

Bateman states that the United States has explicitly or implicitly recognised Chinese sovereignty over some or all of the islands but fails to give any convincing evidence of this. In fact the US did not even recognise the People's Republic's sovereignty over the Chinese mainland until 1979. The only "evidence" supplied was that American actions during the war might have been different had North Vietnam occupied Woody Island, but Bateman fails to explain how or why that should be the case, and he is confusing occupation with sovereignty.

China should stick to UNCLOS

Although peripheral to the central argument, Bateman's statement that China claims traditional rights for its fishermen over most of the South China Sea again lets off Beijing lightly. It fails to mention the more controversial fact that China uses the traditional fishing rights argument to claim oil rights, even though they have been ruled to be unrelated by the International Court of Justice (ICJ) in the Lybia-Tunisia case.

In conclusion, there are too many errors, omissions, unsupported arguments and unbalanced opinions in Bateman's article to support his controversial contention that China may be within its rights deploying the oil rig in its present position, or that Vietnam should unilaterally give up its claims on the Paracels.

The Haiyang 981 confrontation is a case of overlapping EEZ claims. Article 74 of UNCLOS stipulates how the disputing parties should handle these cases, and this Article has been interpreted and applied in the Permanent Court of Arbitration’s 2007 judgement on the Guyana-Suriname dispute.

Dr Bateman could make a more positive contribution to peace and cooperation by encouraging China to submit itself to the dispute settlement procedure specified in UNCLOS.

Dr Huy Duong, a UK-based IT consultant, and Dr Tuan Pham, Assistant Professor at the University of New South Wales, are commentators on maritime affairs. They contributed this jointly to RSIS Commentaries.