Blogging for a Future Democracy: The Story of Anh Ba Sam

On a late spring day in Hanoi, officers from the Vietnamese Ministry of Public Security launched a sudden raid on the home and business of well-known blogger, Nguyen Huu Vinh, better known as Anh Ba Sam (Vietnamese for “Brother Gossiper”). Vinh and his assistant Nguyen Thi Minh Thuy were detained immediately.

A sudden raid–and the “urgent arrest,” as the police put it– is a technique regularly practiced by the security forces in Vietnam in order to suppress political dissent. In Vinh’s case, they have achieved this–for now. Two of the websites that he was reportedly managing at the time, Chep Su Viet (Writing Viet History) and Dan Quyen (Citizens’ Rights), were shut down shortly after his arrest, which indicated that the police were able to gain control of the sites and their passwords. The other blogs, notably Ba Sam News, however, have stayed out of police control and continue their daily work.

Vinh is currently held with no access to a lawyer, and is denied family visits. He is one of the latest of at least 300 prisoners of conscience in Vietnam in the past five years.

The Vietnamese press is state-owned, and the People’s Police as well as the People’s Army both have dozens of printed and broadcasting agencies of their own. They portray Vinh as a blogger who specializes in “reporting and commenting on current social and political issues of Vietnam with a deliberately critical tone” and “trying to uglify Vietnam to make her as bad and ugly as he is.”

So who is Nguyen Huu Vinh? He was born in 1956 into the family of a high-ranking communist official. Vinh’s father, Nguyen Huu Khieu, was twice the ambassador to the Soviet Union, between 1974 and 1980. As the Soviets were Vietnam’s “Big Brother” in Cold War time, this was an enormous privilege, and as Vinh himself admitted in a short memoir in 2012, he and his family led a life of which other Vietnamese could only dream.

As a brilliant “princeling,” Vinh became a student at the Academy of Public Security, then became a public security officer before taking a position in the Department of the Overseas Vietnamese. His experience working with Vietnamese intellectuals in foreign countries made him obsessed with “how much social capital was wasted as a result of bad policies.”

As a man full of ideas, Vinh was possibly one of the first people to see the potential power of the Internet in reaching people’s minds and opening their eyes in Vietnam. In 2005, when Yahoo! 360° came to Vietnam, he soon found himself “blogging” like any teenager in urban cities.

Anh Ba Sam, his first Yahoo! 360° blog created in September 2007, was initially filled with articles he wrote for the state-owned media. However, Vinh soon realized the demand within the country for information about Vietnam from a foreign perspective. People wanted to know “what the world is thinking of us.” He then focused on translating foreign articles into Vietnamese for his blog readers.

Eventually, he began to provide not only articles about Vietnam but also materials about China-Vietnam relations, which even today remains a highly politically sensitive issue.

Vinh’s connections with some people in the state apparatus provided helpful news sources. However, at the same time, they raised suspicions about him being an undercover policeman. A question for many was why Nguyen Huu Vinh, who published material that the ruling party did not want the public to see, was spared from  arrest?

It was just a matter of time.

Ba Sam was identified by the police as a rallying point of “anti-state” forces in and outside Vietnam earlier this year. The site was subject to continuous attacks. Five days after Vinh and Thuy’s arrest, two of their colleagues published a defiant statement, “Nguyen Huu Vinh was arrested, yes, but Anh Ba Sam will never be.” The statement hints at the birth of an even more powerful blogging and writing movement for change in Vietnam, with bloggers following Ba Sam’s path of enlightening Vietnamese citizens on the values of democracy and freedom. There are reasons to believe that it will not be easy for the Vietnamese government to silence bloggers forever. 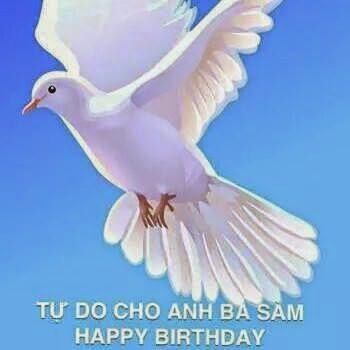