Know Your Rights (2): Say No to Arbitrary Arrest and Detention

At 19.30 Tuesday, August 13, 2013, while a group of six young persons were studying English in an apartment at Gieng Mut Alley, Bach Mai District, Hanoi, the landlord called Tran Quang Trung, a tenant, asking him to open the door. Right after that, two strangers stormed into the house. One of them strangled Trung’s neck whereas the other snatched the cell phone out of his hand.

Later there were about twenty persons looking like plainclothes civil defenders and police officers burst into the house, going upstairs, checking ID cards, and demanding the youth group to put their cell phones on the table. There was only one person in police uniform. They brought three camcorders, pointing them at the young people and continuously recorded their images.

Thuy Linh, a young girl of the class, asked those officers to show their ID cards and stop filming, or else they would be sued for illegally raiding the citizen’s house. Nevertheless, no one of them showed their ID cards. When Ho Duc Thanh, another young person, withdrew his cell phone and intended to call his friend, an officer screamed out, “I am a civil defense officer and I am here to check your residence card. Sit still!” Since Thanh did not “sit still” as required, this person snatched his cell phone, pushing him and making a piece of glass in the house broken.

At 20.30, the youth group was escorted to the police station of Truong Dinh ward, where all detainees’ cell phones and laptops were sealed off, as said, “for temporary confiscation and would be returned after investigation”. Each cell phone and laptop was separately sealed off and had the owner’ signature on it.

As requested by a plainclothes officer, a policeman took the property confiscation minutes which included deliverer, receiver and witness. However, the detainees totally did not know what was written in the minutes. They even did not sign and keep any copy of the minutes.

Afterwards, all the laptops, cell phones and minutes (included signature of police and witness of the police side only, not detainees’ signature) were taken away. The youth group was separated for interrogation. Some were escorted to Hai Ba Trung District, some in custody in Truong Dinh District. The interrogation mainly focused on questions as follows: how their personal record was, the reason why they got to know the English class, how long they had been participating in the class, who organized the class, who designed the program, whether the program was related to politics/laws or not, whether they joined in any political organization or not, whether they know Mr. A / Ms. B or not…

The young persons were finally released. Yet, some laptops and cell phones were still kept by the police. 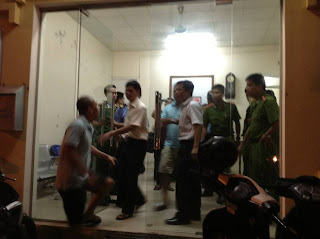 The answer is: This is a typical case of “arbitrary arrest and detention”.

The behavior that a group of people calling themselves “police” whereas there was only one person in police uniform and no one showed ID card raided the house at night and escorted the young persons to the police station without any proof or even an arrest warrant is exactly a typical case of “arbitrary arrest and detention”.

As pursuant to Article 80 of the Criminal Procedure Code:
The police officers (supposing that they are police officers) arrested the youth group at night and confiscated their properties (laptops and cell phones) without an arrest warrant although they are neither offenders red-handed nor wanted persons.

For all the above-mentioned reasons, it is exactly “arbitrary arrest and detention”, isn’t it?

Other wrongdoings made by the police officers

In this story, ironically, the police abused their position and power to record personal images of citizens.


In addition, there is a sign of the police officers’ violating Article 124 of the Penal Code as regards “infringement upon citizens’ places of residence”. Indeed, they illegally raided the citizen’s house and abused their position and power to contravene the law in an organized manner, which shall be subject to a sentence of between one to three years of imprisonment.