Trinh Anh Tuan, a Hanoi-based environmental activist has been brutally attacked by plainclothes agents, with a number of severe injuries in his hands and head, according to local social network.

Mr. Tuan, an admin member of a For Green Hanoi, a campaign to protest the city’s plan to chop down 6,700 healthy aged trees, was attacked by a group of three thugs near his rent house in Long Bien district in early morning of April 22.

Tuan, who is very active in organizing peaceful demonstrations in Hanoi in recent weeks which aim to demand the city’s authorities to stop its massive cutting of healthy trees in the city’s main streets, recognized the attackers as policemen who have been following him for months.

“When I rode my motorbike to the nearby market to buy milk for my baby, they came and kicked my vehicle. When I fell on the road, they jumped and attacked me. One event took a brick and attacked my head, causing bleeding,” Mr. Tuan said.

This is the second time Tuan was assailed by thugs. In late March last year, he was also brutally attacked by plainclothes agents after participating in a cafe-meeting of Hanoi-based members of the Vietnamese Blogger Network, a social network which fights for freedom of expression in the communist nation.

Meanwhile, Hanoi’s environmentalists have held five consecutive demonstrations in the city’s center on Sundays in March and April despite numerous measures applied by local authorities which aim to prevent growing public discontent on the city’s plan which would turn the city into desert.

Along with harassing leading activists, local authorities have also summoned others to police stations, accusing them of causing public disorders. Police have also blocked a number of activists from going out during weekends.

Police have also pressured activists’ families and relatives, and asked them not to participate in peaceful demonstrations in coming weeks.

So far, they have cut 2,000 trees; most of them are valuable and planted by French more than 100 years ago. 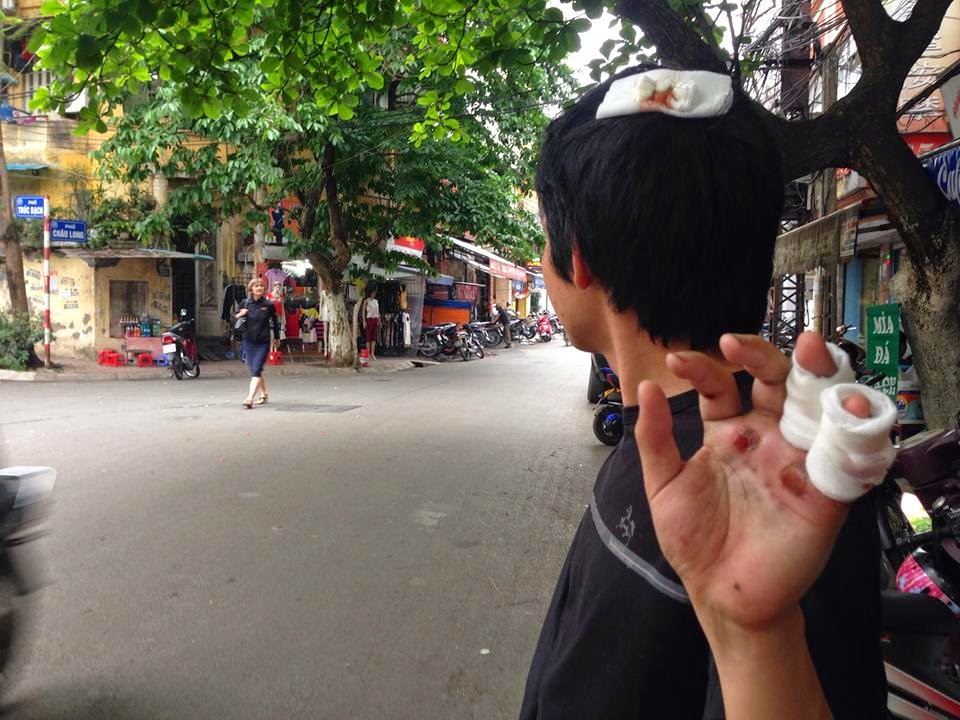 Trinh Anh Tuan (aka. Gio Lang Thang - Wandering Wind) with his head and hand wounds.
The photographer asked to remain anonymous for fear of political repression.