The Body of a Revolution

I was speechless for a long time today, looking at a photo my Vietnamese Facebook friend Henry Pham shared with me: several bodies slumping on three small carts like sandbags, some of them had their hands tied at their backs. A dozen people standing a few yards away looking on. Henry wrote to me that it took him a long time to calm down and he almost threw up. Another Vietnamese friend, Vi K. Tran, first alerted me to the story with her translation of Vietnamese media coverage and Facebook postings on Saturday. She was angry and was eager to spread the truth. "From your FB I learned how the Muslims and Uighur are treated, so this is even more upsetting. :'( I, too, want to stand up against these inhumane treatments from these two regimes (Chinese & Vietnamese).

Many Vietnamese friends like Henry and some Western friends have been questioning why the victims were handcuffed. How could they have seized guns, let alone fire any shots? Who knows? The media in Vietnam and China are tightly controlled by the Communist Party and all the Western media coverage has been quoting Vietnamese state media coverage. Bac Phong Sinh, the border checkpoint in Quang Ninh province where the tragedy happened has banned independent and foreign media. It all sounds like in China. And it's all very frustrating. 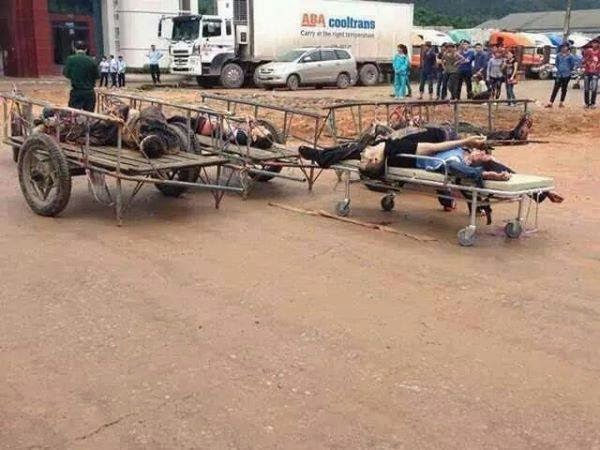 Following this story's news trail is deja vu all over again -- reminiscent of news coverage of Xinjiang and Tibet. But thanks to social media and the vibrant Facebook network among Vietnamese (a Vietnamese journalist told me there're as many as 20 million Facebook users among his compatriots), such a photo along with others that I shared with my Facebook and Twitter friends since Friday, plus the valuable information and in-depth analyses from my Vietnamese friends have brought forward so much more truth. Now we know 16 people from Xinjiang including four women and two children were detained by Vietnamese border guards. Five of them died in gunfire or by jumping off a building on Friday. Two Vietnamese officers were killed. Four people were injured.

I'm truly touched by my Vietnamese friends' compassion, caring and political awareness. I was brought up to believe it was right for the Chinese troops to invade Vietnam in 1979 in a "Self-defending Fight-back" war. I was in elementary school in Chengdu and watched camouflaged military trucks loaded with soldiers and supplies drove by my home day in day out on their way to the railway station. We watched TV footage of Vietnamese "looting" Chinese villages and heard war heroes telling us stories of their battles...

It took me decades to learn the truth of the war and it was my Vietnamese friends' compassion and passion for human rights and freedoms that gave me more strength about fighting against communist regime. After all, Vietnam has been China's little brother for all these decades.

Instead of complaining about illegal immigrants, my Vietnamese friends criticize their government's cowardly attitude in treating the matter by following Beijing's order, and they condemn China's oppression of the Uighurs. I've been conveying their messages to my audience on Twitter, who are mostly Chinese (I have about 2,700 followers). They have also expressed much sympathy and compassion towards the Uighur refugees. Many of them question why the Chinese government alerted the Vietnamese authorities before the refugees crossed the border instead of trying to stop them in China. The tragedy has also sparked debates on Twitter about China's oppressions in Xinjiang and Tibet. So at least this is the blessing in disguise, in a poignant way, after such senseless and unnecessarily loss of human lives. One of the Vietnamese border officers who was killed, his wife is pregnant. Both of the Vietnamese victims were non-combatant officers, according to Vietnamese media. As for the Xinjiang victims and the survivors, we know nothing. Absolutely nothing, but such photos of undignified deaths and repatriation!

Chinese Tweeterer Wang Bing @tom2009cn (profile description "Enemy of Tyranny") wrote to me after I posted the photo of victims on the three carts: "Transporting bodies like this obviously shows how two Communist countries neglect and crush any human dignity. They're the same." I replied: "Under a dictatorship, those who are alive don't even have any dignity, they certainly won't after they die." Wang wrote: "This is bound to end." I replied:"Truth and justice will overcome lies and evil. I firmly believe that." Wang wrote: "Definitely!"

And yes, the stories of these Uighur victims and survivors will come to light one day and justice will come to them. As Chinese and Vietnamese governments keep crushing dissent and jailing dissidents, the resistance will become even stronger. They can jail us but they can never jail all of us. They can kill us but they can never kill all of us. Dharamsala-based Tibetan poet Tsering Wangdu sent me this line from Pablo Neruda:"You can cut all the flowers but you cannot keep spring from coming."

Here let me quote from the Manifesto of the Communist Party by Karl Marx and Friederich Engels that I was forced to recite as a kid: "They throw workers, already desperate, onto the street. Also, they spread, farther and deeper, into markets that had not been exploited or markets that could be exploited more. And in doing so, they dig their own graves. The bourgeoisie pave the way for ever worse crises." These dictators in China and Vietnam aren't real Communists, they're bourgeoisie disguised as Communists. They're Power Capitalists, as veteran Chinese journalist Yang Jisheng who authored "Tombstone: the Great Chinese Famine, 1958-1962" coins it. His own father died of starvation in the Great Leap Forward and Mr. Yang spent more than ten years ploughing through official records on starvation and cannibalism -- plenty of bodies to count -- about 50 million, including 11 of my relatives.

Decades on, these blood-sucking, power thirsty monsters still think they can just control billions of people with lies and violence. They think they can block the Internet, jail the activists and control our minds. They're wrong. Can't they see that they're further digging themselves into their graves? And some may even meet their end quite violently, just like those ruthless Chinese City Management Officers (chengguan)  who are fighting for their lives right at this moment after they mobs beat them into a pulp n Saturday in the bustling city of Wenzhou in eastern China. Thousands of people gathered and hit back at them with whatever weapons they could find, sticks, fire extinguishers after the officers brutally beat up a man using his cell phone to take videos of them beating up a vegetable vendor. Hundreds of riot police were called into the scene and dispersed the crowds with tear gas. But the damage had been done...there was blood everywhere. The officers’ mangled bodies were lying in very undignified positions inside a blood-soaked van. See photos on this link (warning, graphic scenes) http://revolution-news.com/china-violent-government-thugs-beaten-death-angry-crowds-killed-man-documenting-brutality/

While many Chinese on social media are cheering on the retaliation as a righteous move, some, including myself, are calling for calm. Violence should not be a solution to crisis nor should it be a weapon to fight against violence. But China is such a volcano, anything like the Wenzhou incident could trigger a domino effect across the country which would bring a long awaited upheaval and flatten the motherland.  I dread picturing bloody bodies scattered around, either those of the innocent or the culprits. I’m working hard on a peaceful revolution and am hoping for as little bloodshed as possible. When the “bourgeoisie pave the way for ever worse crisis” as Marx and Engels chanted 166 years ago, I truly hope the Communist Party's worst crisis will finally arrive, but I dread to see any more bloody bodies... I only want those tyrants and their cronies to be in the courtrooms and in jails,  their assets around the world frozen. I can't wait to see them being chased by the Interpol and their properties and moneys they've robbed off the people returned to the people. While I'm joining in an increasing louder voice to topple the Communist Party, I'm also adding my voice to a peaceful, non-violent resistance movement.

Truth and compassion are our real weapons. I'm looking forward to that day when I don't have to look at pictures of bodies or write about their tragedies on a daily basis...
Posted by Đoan Trang at 06:01