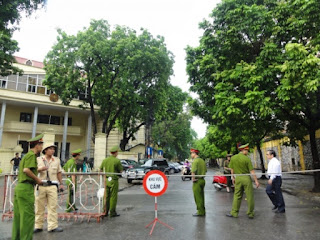 As written in the first part, “more than anyone else, the Communist Party – herein represented by the propagandists and public security machinery – is aware of the power of secrecy. Transparency only means self-defamation and suicide.” Therefore it is crucial to ensure secrecy in a variety of areas, ranging from work secret to national security. This can be done via the implementation of a basic principle, that is “to do good in propaganda of the communist ideology” and to keep the press under tight surveillance.

With the advent of the Internet and especially social media networks, however, the task becomes more difficult. Given such context, the propaganda and public security machinery must deal with controlling official media and, at the same time, suppressing the unofficial one, ie. the Internet media.

A subtle measure taken by the Party to control the media in the name of “media management” is to maintain the so-called “press card” (not press badges which are issued to journalists covering a specific event). A Vietnamese press card is granted by the Ministry of Information and Communication to a reporter only when he/she meets a set of requirements imposed by a circular titled 07/2007/TT-BVHTT, including “not to be rebuked in the previous 12 months” and “to be recommended by the media agency, the line ministry, the Department of Culture and Information and the Association of the Press.” All the requirements are hard to meet, especially for reporters who tend to criticize the Party.

In particular, the requirement that the reporter must be “recommended by the media agency, the line ministry, the Department of Culture and Information and the Association of the Press” manifests the vague boundary between the state sector and civil society. The press per se is part of the realm of civil society, and the media agency is not an agency performing official duties.

Accordingly, the government is not entitled to grant press cards to identify those who work in media area; in other words, it cannot make invention in an area beyond its jurisdiction. However, the government in reality keeps exercising this authority, even prescribes that “The media operating within the Socialist Republic of Vietnam is the essential means of providing public information in relation to social life; is the mouth piece of Party organizations, State bodies and social organizations, and a forum for the people” (Article 1 on role and function of the media, Vietnam’s Law on Media, 1999) and the media must “disseminate, publicize and contribute to the establishment and protection of the strategies and policies of the Party, the laws of the State, and the achievements of the country and the world in accordance with the guiding principles and aims of media organizations; to contribute to political stability” (Article 6 on the responsibilities and rights of the media).

As a result, a great many journalists are subject to the direction of the machinery of government whose capacity of communication is decidedly inferior to theirs.

Some may say press card itself is no more than a card, thus it is of not much significance. However, press cards are very important. A journalist is someone “who is granted a press card” in law as well as in social perception. Those without press cards are not recognized as journalists. Consequently, they will evidently be barred from any event that the organizers, the police, and the authorities, dislike the press to attend. “Press card bearing” is often referred to as one condition for journalists who want to attend state-organized, high level meetings. With this requirement, the organizers succeed in blocking hundreds of reporters and, of course, bloggers.

More than anyone else, the police insist that only those granted with press cards are recognized as journalists and that those without press cards are just “self-proclaimed” reporters or freelance writers who must not be given access to “authorized information”. On October 30th 2012, Catholic blogger Huyền Trang was detained and interrogated for nearly one day in a Ho Chi Minh City police station. When she told the police that she worked as a reporter for Redemptorist News, an online Catholic news service, they shouted at her, “Who recognized you? Where is your press card? You all are a band of reactionary parasites!”

In 2011 and 2012 alone, dozens of journalists reported being harassed or even assaulted by the police, ruffians and even civilians. However, their denunciations and complaints simply went ignored because they were not “journalists performing duties” in the eyes of the authorities.

Being unrecognized may cause much more trouble to bloggers because they do not receive protection. Dieu Cay and Ta Phong Tan, the two members of the Free Journalist Club, were severely persecuted when they came to hot spots to report for their personal blog. Both were given harsh sentences in the end: 12 years of imprisonment for Dieu Cay and 10 years for Ta Phong Tan.

On the one hand, the Party and the state tightly control official media. On the other hand, they keep denying the existence of “citizen journalists”.

Both the mainstream media and the blogosphere heard of Truong Duy Nhat, who quit his journalistic career to become a blogger. He is now the owner of the blog “A Different Viewpoint”. Following his arrest on May 26, 2013, journalist Duc Hien (aka. Bo Cu Hung) commented on his FB page, “the thing is that a journalist must be able to access information. If he or she lacks the ability or opportunity to access information, his or her different viewpoint will be either insults, or libels, or talking along the same line as someone else…”

Ironically while political bloggers harshly criticized Hien, he was right from the viewpoint of the authorities. The ability and opportunity to access information remain a huge difference between a journalist and a blogger, or a state-recognized journalist and an independent (free) one. There is no way for a blogger to attend major social or political state-organized events and gatherings, international and national conferences, or to interview high ranking officials of the Party and the government.

The authorities are fully aware that they must employ this disadvantage of the bloggers to keep them in the disadvantageous position to the press. At the same time, they deliberately create an invisible war between “right side” and “left side” media to curb any form of cooperation between state-owned and citizen journalists.


Note: Le Doan Hop, in his office tenure, said in an interview given to the Sai Gon Giai Phong on August 3, 2007, “You the press are absolutely free if you keep to the right side of the road, and we are making efforts to keep you, comrades, on the right side.” Possibly from that time on, Hop’s concepts of “right side” and “left side” in media gave rise to a famous metaphor, “right side press” to mean state-owned newspapers as opposed to “left side press” to mean “reactionary”, out-of-state-control blogs.